Gwen John by Sue Roe
My rating: 3 of 5 stars 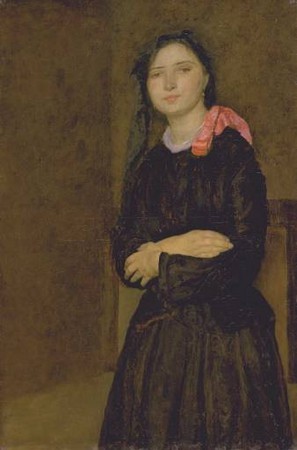 Dorelia in a Black Dress

Augustus John said he would be remembered as the brother of Gwen John, but judging by the review excerpts on the back of Sue Roe’s calmly written biography, Gwen herself has been remembered as an eccentric. My strongest impression on reading this is that folks have simply lacked the imagination to relate to an independent, passionate, driven WOMAN. Aspects of her have to be packaged into pathological components:

“she was a recluse” = she chose to live alone for most of her life. However she knew all her neighbours, was well known in her community and had many correspondents, old friends and business connections, whom she visited, invited, and vacationed with

“she was obsessed with and utterly dependent on Rodin” = she was passionately in love with him, wrote him letters, demanded lots of sex, and was fiercely jealous. Really really weird behaviour, unless you pretend she was a man worshipping a woman, in which case the ‘great love’ would be praised

And so on. Gwen loved her cats, slept in the woods or her outbuildings at times, and was exacting in her choice of apartment. She was rather touchy and difficult to mollify once offended. She worked every day at her painting and drawing, working slowly, rarely keeping her promises as to timing. This is not acceptable female behaviour! Fortunately, Gwen had many sympathetic people in her life, not least her family.

On the whole this book is a pleasant read. I myself find I struggle when non-fiction messes with the timeline a lot. I can deal with the odd digression or jaunt down memory lane, but Roe befuddled me with her foreshadowing and backtracking. Through a dodgy grasp on pop neurology I relate my poor ability to integrate and synthesise to my weak drawing skills; I don’t blame Roe for my confusion. And if her story of Gwen isn’t crystal to me, the image of her that emerges is.

Roe writes wonderfully, with insight and clarity, about Gwen’s work. That this the best aspect of the book. If you want to know how John worked, what motivated her, how she felt and thought about what she did, the answers are here, and they are rewarding. No one will accuse John of selling her soul for her extraordinary talent of capturing mood and stillness; she worked with intense spiritual focus and made many versions of each work, inching towards something that would satisfy her.

I do wish though that Roe had taken a bit more of a feminist line. Some of the things she says about John’s affair with Rodin present rather an essentialist perspective on ‘a woman’s feelings’ and it’s disappointing to see John’s passionate attachments to two separate women later in her life dismissed as ‘confusion’ rather than the possibility being left open that they were romantic.