The Penguin Book of English Short Stories by Christopher Dolley
My rating: 2 of 5 stars 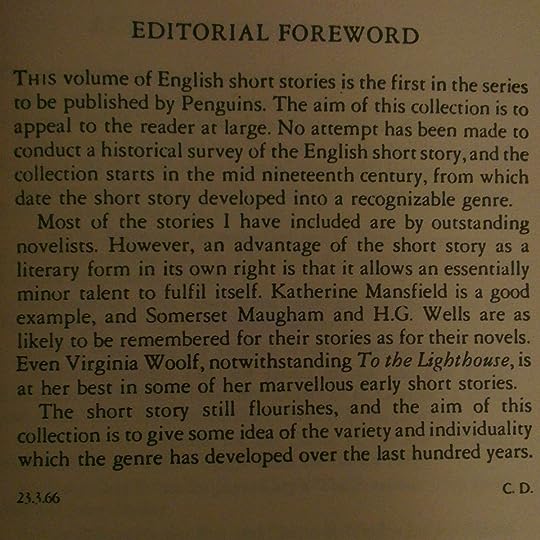 Thus Dolley washes his hands. I can almost hear the snort he might give me if I took issue with him for including stories by James Joyce, and indeed that ‘minor talent’ Katherine Mansfield in a collection of ‘English’ short stories. So readers, there is no help from our editor here; if we dislike what we find there is no point in appealing to him.

We kick off with ‘The Signalman’ a morbid, fatalistic little story full of physical description by Dickens that is neither here nor there. One man meets another man. Later on there’s another fellow in a walk on part. The tale does its trick and ends.

Then we have Thomas Hardy with ‘The Withered Arm’, of which I managed four pages before skipping ahead to Joseph Conrad’s ‘An Outpost of Progress’, about a pair of stupid, greedy, ignorant white men at an ivory trading post somewhere in Africa. Unsurprisingly the fools lose their minds and turn on each other. Before that they enjoy lording over the jungle and admiring the beautiful muscles of African people. The theme continues with Kipling’s ‘At the End of the Passage’ about some more white guys going crazy in some anonymous colony. Being a colonist is such a rough gig!

To H.G Wells’ The Country of the Blind, which I feel is an interesting idea buried under an excess of expository detail. Our protagonist is an unpleasant fellow, while the folk he stumbles across in the mountains are peaceful and organised. Yet somehow, Wells seems to side with the bellicose invader after all, celebrating the beauty he sees and his escape from the benighted (though gentle) savages.

If you’re feeling empire-fatigue, brace yourself for another march through W Somerset Maugham’s effort ‘The Force of Circumstance’ which is set in Malaysia, and traces the demise of an unconventionally joyful marriage, ruined because Guy hasn’t told Doris that before she moved out from glorious England to be his deliriously happy wife, he bought a fifteen year old native girl to live with him as his wife-slave. The former wife-slave keeps hanging around with her (and Guy’s) children and upsetting things, until Doris finds out and after thinking things over, tells Guy she’s not angry with him at all, he’s never done anything wrong, but she just can’t face having sex with him as the the image of ‘those thin black arms of hers round you’ ‘fills [her] with a physical nausea’. She says ‘I think of you holding those little black babies in your arms. Oh, it’s loathsome.’ So, Doris manages to blame herself, apologises profusely, and leaves Guy to himself. Once she’s gone, he is miserable, but graciously allows his former slave wife to return to him. Ladies and Gentlemen of the jury, Maugham stands before you accused by me of apologising for
#1 child abuse
#2 colonial slavery
#3 victim blaming
#4 misogyny
but of course, it was all under ‘force of circumstance’, so do go easy on the poor chap.

Finally we are through the desert/wilderness/jungle (ha! irony!), we can refresh ourselves at the oasis of Joyce’s many-themed, classic story ‘The Dead’ without getting into a froth. In fact the action takes place around a cosy Christmas party so we can rest here in comfort. I’m not even going to talk about it; it’s so good I wouldn’t want to spoil. You can find it in Dubliners. Woolf’s short, sweet, experimental piece ‘Kew Gardens’ follows and the same applies; it appears in collections of her stories elsewhere.

Next comes Lawrence with Fanny and Annie, which merits feminist analysis. The protagonist of this story knowingly, self-destructively enters a marriage that benefits the man and strips her of freedom and potential for self-actualisation. Lawrence seems to justify this outcome. Fanny feels that she is fated to marry Harry, to feel desire for him and be overwhelmed by him. I don’t find this victim-blaming story at all credible.

Another rest for us on our dismal voyage follows in Katherine Mansfield’s beautiful, original, evocative story ‘The Voyage’, told from the viewpoint of a young girl travelling with her grandmother. This story is like a bank vault full of gold. Images of light and dark, childhood and adulthood, life and death shimmer and glow under its subtle surface. I found this helpful and interesting post about it

And the remaining stories are all various shades of good! Aldous Huxley puts in a nuanced, clever and unconventional murder mystery ‘The Gioconda Smile’, and Evelyn Waugh and Graham Greene put in entertaining efforts.

Finally, Angus Wilson’s ‘Raspberry Jam’ deserves some attention as a surprise in this collection. It’s a story against misogyny, heteronormativity, beauty-as-goodness and mental health ableism. It celebrates child agency, kindness and empathy. I just don’t know why it all goes so horribly wrong at the end. What happened Angus?!