They Fought In The Fields by Nicola Tyrer
My rating: 4 of 5 stars

I read this book because my maternal grandmother was a Land Girl, although I don’t know as much as I’d like to about what she did. Like many of the women who volunteered to literally help feed the war effort, she came from a working class urban background and left school at fourteen. Most of these young women were working before they entered the Womens Land Army, in domestic service, in factories, as waitresses, as shop clerks. Tyrer often highlights how the WLA was structured on class lines, with a small middle/upper class administrative staff, and thousands (87,000 at its peak in 1943) of working class members. Farming was seen and paid as unskilled work, and Tyrer points out that the efforts of the WLA’s head Lady Denman to improve pay and conditions for members helped all agricultural workers.

Tyrer is a great admirer of Lady Denman, whom she describes as the member of a vanishing class, the philanthropic, Liberal gentry. She is less enamoured of Vita Sackville-West, who was heavily involved with the Land Army (this was news to me), but rather abused her position, for example to get Land Girls to pick raspberries and arum lillies for her friends’ dinner parties. Tyrer describes her as a snob, and she certainly comes across that way in the quotations here.

Tyrer leaves the reader in no doubt of her own opinions, but her judgements never have a personal voice; she presents them as the surely-everyone-in-their-right-mind-would-think-so view. She uses first-hand accounts both as brief chapters scattered through the book and as short quotations within her own text, forming a kind of evidenced research project. The material is occasionally sensitive: the reputation of WLA members as ‘promiscuous’ or ‘predatory’, words that made me worry about sexual assault on them. Tyrer includes some reports of creepy and persistent sexual harrassment from British male farm workers, and less frightening but still annoying harrassment from Italian prisoners of war. One woman reported that an Italian POW ‘jumped out of a hedge and kissed’ her.

Elsewhere, there are many stories of Italian PsOW, who were treated well under the Geneva convention (often better than Land Girls whose employment was poorly regulated despite Lady Denman’s efforts) giving underfed, overworked women dried fruit from their own rations, and otherwise being generous, kind and friendly – one woman reported that those she knew missed their families and made friends with the farmer’s young children.

Italians were just some of the foreigners the young woman of the WLA occasionally encountered in their work. American servicemen in particular had a reputation for promiscuity. There are some mentions of African American soldiers, including one rather striking recollection by a Land Girl of her ‘first encouter with the Colour Bar’ when she was asked for directions by a black serviceman, but did not know the area and replied “I’m sorry I can’t help you” and was misunderstood by the man who replied all forgiveness and generous tolerance toward the individual constrained by a system “I’m awfully sorry, will I have got you into trouble by stopping you?”. The woman was upset ‘to think I had hurt someone that much’. Other women mention drinking in bars with black USians even when proprietors and British soldiers frowned on it.

All in all, the Land Girls themselves are highly praised by this account of them. The frank sexism of the National Farmers Union, the lack of support from government, and often poor conditions in the job were inadequate obstacles to their determination and abilities. Tyrer says that ‘they made their opponents change sides’* since after the war the NFU, along with many individual farmers, praised them warmly and lobbied for the service to be maintained. Tyrer cleverly constructs the narrative with an emotional arc from uncertain and difficult beginnings, with tales of miserably inadequate food, cold, lack of sanitation, scornful employers and loneliness towards the front of the book, towards triumph at the end, where happier testimonials cluster: sociable hostel life, kind farmers and families, parties and dances, and above all love of the land.

*but I’m sad that she turns this into a dig at feminism, repeated in the introduction and late in the text when she mentions that many Land Girls, like my Nanna who settled down with a fellow farm labourer, left the service for marriage and babies. While some feminists have been guilty of criticising women for taking on the role of wife-and-mother, it’s a gross misunderstanding to suggest that all of us do! Feminists fight sexism, as the WLA did.

This edition includes some lovely, evocative photographs – only a few of them formally posed in class-photo style. Looking at the well-designed uniforms and the hardwood, simple yet elegant chairs in hostel dining rooms reminds me how beautiful every day things were before the era of mass production. These things would be incredibly costly now. The photos also document practices widespread before the large scale mechanisation of farming. WLA members gained heritage skills like thatching that are now extremely rare. The women look remarkably healthy – these powerful thighs, toned waists and doughty arms must belong to the ones eating hearty meals rather than those who survived on bread-and-jam. And their old fashioned curly hair reminds me of my Nanna and that the long & lank fashion of today is a recent trend. 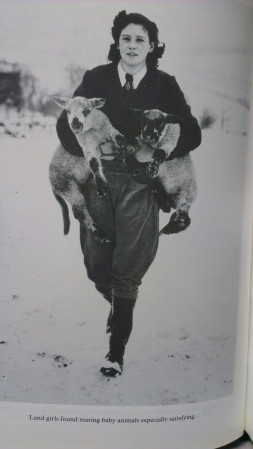 One thought on “A Biography of the WLA”