Deathless by Catherynne M. Valente
My rating: 3 of 5 stars 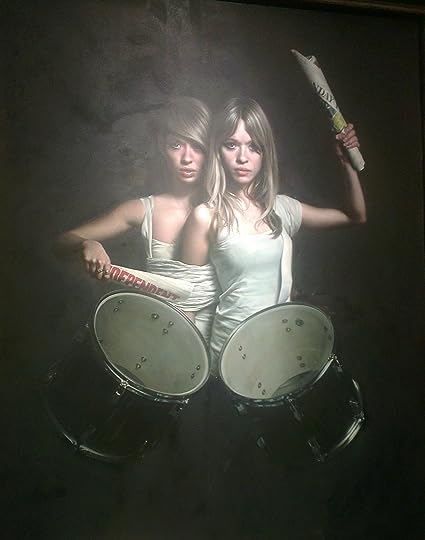 Seriously, for most of this book, I wanted it to stop. I reminded myself that you don’t need a safeword for reading a novel, if you don’t want it to go on, you just close the book, see, easy

Only it isn’t easy when it’s a magnificently written book and you’ve already lost your heart a little bit to the protagonist, then you’re stuck, chained to the wall being whacked with birch switches…

I am reminded that fascism is aesthetic. The folk at the top who have control can only go on believing in the whole shebang because they love the glint of polished brass on military uniforms and the gleam of milled alloy on the muzzle of a gun and the sheen on a dark pool of spilled blood. Fascism: a relation to the world defined by shininess.

Stay with me here (or don’t, please please don’t feel coerced) because I’m only laughing so that I won’t cry.

Carol’s wonderful review points out that Valente radically retells this Russian fairy tale from Marya Morevna’s viewpoint. That’s what caused me to feel totally abandoned, because as soon as Marya is riding through the forest hunting a firebird and gleefully ‘punishes’ one of her companions, a gun-woman whose favourite game is interrogation, by partially suffocating her, I realise that in the whole creepy sequence before that in which Marya was kidnapped and fed by Koschei, who said to her, tonight we’re going to take your will out of your jaw and I’m going to keep it for you and you’re less than a novice so suck it up, and she was vomiting all that rich food, all the meat and cream, her body violently rejecting Koschei’s violence, I was wrong to take heart from that rebellion, which I thought was a clever twist on the fairy land rule that you mustn’t eat anything, or you won’t be able to come back (yes it’s all about virginity isn’t it? Those Victorians have still got their white-gloved claws into me I guess). I was wrong to cheer her poor wrung stomach, because she was quite happy to hand over her will.

Go ahead and call me out if I’m being kink-phobic, but I didn’t have such a big problem with Marya and Koschei’s kinky relationship as I did with the hierarchical relationships EVERYWHERE in the story, between folks, objects, lands, gods, everything, EVERYTHING was a relation of domination, except maybe a few precious friendships that had horizontal aspects. For me the impulse to dominate is the root of fascism & imperialism, and it’s pretty much everything that’s wrong with political and social structures, and any liberatory strategy has to involve rejecting it. Of course, you can point out that needs must; I wouldn’t have got ten feet in a world like this, I’d have been squashed under Baba Yaga’s pestle in a trice, but that awareness doesn’t help me feel at peace with any of it.

But why should I feel at peace? Fascism exists. And what Valente does so very cleverly is weave Soviet communism into the weft of the fairytale, so that its militarism and heartlessness are exposed for critique, old fascism in new bottles. Marya observes that Koschei’s underlings are organised communist style but that he himself retains the same old elite aesthetic privileges of fine food, luxurious clothes and so on. I actually felt relief when Valente turned her arid humour on the horror of famine in St Petersburg/Petrograd/Leningrad:

I will tell you how we made soup in those days: Hold a ration card over a pot of boiling water for thirty minutes, so that the shadow of the card falls on the broth. Then eat it up, and don’t you dare spill a drop

This was relief because Valente and I agreed on the horror of the horror. This quote is from the section narrated by the house-imp (domovaya) of Marya’s house, which was leaven to the whole book for me. Perhaps it was the nakedness of the narrative voice (like Marya’s description of magic/fairytale as the ‘nakedness’ of the world ) that so anguished me (seriously, my nerves were flayed, I was distraught) because Zvonok’s storytelling was like balm, although she, tough enough to live on ashes, was telling the harshest part. The domoviye in general were an aspect of the story I really liked, their enthusiastic, comically officious embrace of Soviet communism, their committee of households in the overcrowded house.

I guess I felt that Valente’s portrait of the very soul of Russia was painted, via a fairytale full of opposed binaries, in a terrifying imaginary. Her creative and affectionate evocations of the non-human are imbued with an unbearable hardness: ‘Horses are godless. There is only the rider, and the whip.’ says a horse to Marya! I can’t find any home for my consciousness in this imaginary and the fairytale itself repels me. Life and death aren’t warrior kings at war but phases of a cycle; one is impossible without the other. Call me a killjoy, call me a philistine, I don’t care. My very last word has to answer the assertion that all that matters in marriage is who is to rule: I say, be neither ruled nor ruler. Let us all lay down our weapons.

4 thoughts on “A difficult read…”